The Orchestra's final stop on tour.  It has been 15 years since the SFS has visited Japan's capital city, its biggest and liveliest by far.  The scale and size of this city could be overwhelming for the first timer, but after spending a week in China, Tokyo seems almost quiet in comparison.  There is a serene side to this city, graceful gardens and quiet temples in contrast with the skyscraper jungle not far beyond, and life seems a bit more orderly and restrained in comparison to our previous stops. 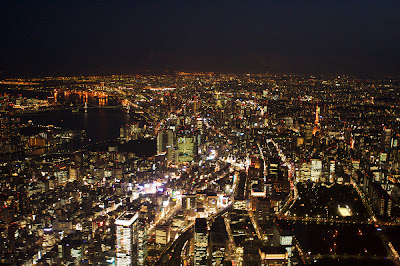 In Tokyo, the Orchestra is very much looking forward to performing in Suntory Hall, considered by many the best sounding concert hall in Asia, and one of the top halls in the world.  Mahler 5 was on the program tonight, and MTT and members of the Orchestra were ready to give this work, their calling card on this tour, one final and memorable performance.

After an absolutely brilliant concert in what was indeed for most the best sounding hall on tour,  the audience reaction to Mahler's Symphony No. 5 was something I haven’t seen before.  Not so much by the volume but by the fact that they just wouldn’t stop applauding. Standing ovation after standing ovation, bow after bow, MTT finally took concertmaster Alexander Barantschik off the stage to signal to the crowd to go home.  He and the strings walked offstage and house lights went up.  Normally that does the trick.  But not tonight.  While MTT was beginning his meet and greet backstage and the congratulations flowing, we all noticed that the applause was not dying down.  Most of the orchestra, aside from a few brass and winds, was off the stage long gone.  But the crowd kept applauding. As if willing the Orchestra and its Maestro back for more. They certainly did not want to go home.  After another few minutes, we realized that they were not going anywhere, MTT  finally went on for another bow, the stage now mostly empty.  He even gave the handful of brass still left a bow themselves.  The audience still did not stop.  As the final brass exited, they got their own ovation.  But the clapping went on.  Several musicians came back onstage, cases in hand to also recognize the crowd and Michael took a final solo bow.  Many musicians felt this was the most profound ovation they have received as musicians and were humbled by the reaction.   The Orchestra loved the hall and clearly the crowd loved them.

After a memorable night at Suntory, the Orchestra gets a well deserved morning off to recoup for the final concert.   But for 12 hearty souls known affectionately as "the team of the Century" a morning off in Tokyo meant playing softball for global bragging rights, in a game agains the Tokyo Philharmonic.  Having beaten the NY Phil and Philadelphia Orchestra in similar games last season, the SFS takes on another Orchestra also celebrating a century of music making, its Japanese counterparts from the capital city.  Baseball is equally as popular here, and the Tokyo Giants, like its San Francisco counterparts, won the title this year.  Game on!  The team ventures out to beautiful Ueno Park amidst a perfect fall day for nine innings of fun on Masaoka Shiki Memorial Field, named after the great 19th century haiku poet and baseball fan.  For those keeping tabs at home, final score:  SF Symphony wins it 23-3.

The Orchestra's final tour concert is that night, in Tokyo's Bunka Kaikan, adjacent to Ueno Park and site of the morning's festivities on the baseball diamond.  The all Rachmaninoff program ends the tour.